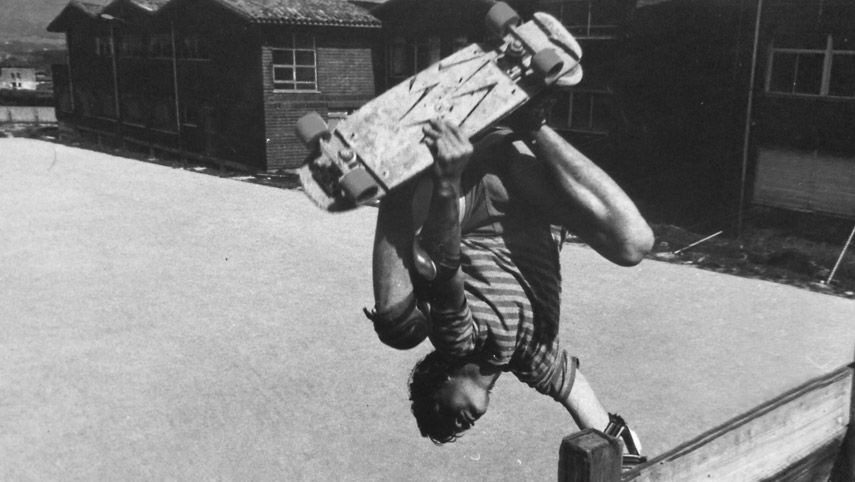 A life dedicated to skateboarding

Txus Domínguez CEO of Zutskateparks began skateboarding in 1974 with his brother Miguel Domínguez and a group of friends. Their first skateboards were a couple of Sancheski’s, European skateboard pioneer brand that build skateboards since 1964 in their factory in Irún, Gipuzkoa.

Precedents to skateboarding and first steps

In the Basque Country already existed the goitibera (from euskera goitik behera, literally “top to bottom”), a DIY gadget made with pieces of wood and truck ballbearings that was used to downhill.

In the absence of material to skate aside of the rudimentary Sancheskis, and loyal to the “DIY” tradition of the goitiberas, this group of friends managed to build their own skateboards, made of hardware store materials and recycling the few components that came from abroad back then.

Txus Domínguez and the pioneer group who accompanied him came from Getxo, a coastal town of Bizkaia with a big surfing tradition and countless hills. It was inevitable that their first steps in skateboarding were “asphalt surfing”, imitating the sport that had arise skateboarding in the 60s in California, so to keep gliding with their skateboards when they were wave starving.

It was around 74-75 when more information of the trendy sport in USA began to arrive, in the form of the first edited skateboard magazines that came in dribs and drabs, where you could see pictures of wooden ramps and the first concrete skateparks and bowls, they were all blown out by the images.

With lots of motivation coming from news that arrive from overseas the Dominguez brothers with their friends began to build wooden ramps, first one in their own backyard.

In the beginning they were very simple, just leaning a door against a wall, like an inclined plane. But soon they started evolving them, quickly learning through trial error to make authentic primitive facilities functionals for skateboarding.

With the boom of the wooden ramps, and although most of skateboarders were surfers, and were still surfing the hills, in the ramps new modern specific skate tricks were beginning to show up.

Voice spread fast during those years and soon new volunteers started to build their own ramps, although none of them with the success and longevity as the one by the Dominguez’s home, in which there were days it was packed with kids and curious onlookers avid of knowing and trying this new discipline.

Between the years 77-79 with the wooden ramp boom and although most of skateboarders around were surfers or wannabe surfers, and were still surfing hills, in the ramps new modern specific skate tricks began to appear, further away from surfing, tricks like inverts, airs, foot plants, etc…

By 83 institutions began to realice the existence of the sport and the first skatepark in the area was build. A wooden halfpipe and a couple of modules with inclined planes and ramps, all installed in “Nogaro” the amusement park of Bizkaia.

In Getxo, home town of the Dominguez brothers, the council financed the construction of a perfect quarter pipe for the Children’s Christmas Park, which was active for several years, until the fight for the construction of the first concrete skatepark, La Kantera, began, it was 1985.

There was no one more active than Txus and Miguel Domínguez when it was time to fight for the skatepark. They were the main activist in the collection of signatures and the first ones contacting with the council.

Finally by the year 86 la Kantera is build in Arrigunaga’s beach, Getxo, with the advising of several local skaters with Txus leading the pack, managing to correct multiple mistakes in the plans and helping with the construction details, in which can be considered as the ignition spark of a life long skatepark construction professional dedicated carrier.

For the next years La Kantera turned into the hub of the national and international skate scene, an skateboard oasis by the sea located in the middle of and old fortress ruines, a place of pilgrimage for skaters all over the world, and a authentic talent pool from where some of the best national skaters with international projection emerged.

Other facets of Txus Domínguez that reveled during that time was his capability for skate event planning, being the person in charge of countless events and contests at La Kantera for years to come, among them the famous “Bajada de Arrigunaga” an spectacular downhill that ended in the skatepark.

The seed of a skatepark construction company

After La Kantera’s construction a phenomenon took place that settle the bases for Txus’s future as professional skatepark designer and constructer. For the next years quite a few councils from the region decided to build clones of La Kantera all over the north geography without any kind of professional advice or experience in skateparks, making countless mistakes in the constructions.

This phenomenon joined with the economic crisis of the 90s leaded to an stagnation of the blooming skate industry and trend.

During those years Txus interest focused on concrete pools, which were used for skating in the California area, thanks to the fact that they are build with curved transitions to make easier the cleaning, and with tiles that created the perfect “coping” for all kind of lip tricks.

In 1996 he travels to USA with the intention of skating pools and investigate designs, constructions and the skatepark scenes that still remained.

Back from the trip and after fighting for several years with Getxo’s council, Txus designs and builds the first public skate pool in Europe.

La Kantera’s pool elevates worldwide this skatepark fame, whose impact is known by 2000, thanks to the famous “Pool parties” organized by Txus Domínguez itself, events with a demo-contest style that were sponsored by the best sector brands.

Since the success of the Pool experience in La Kantera, and capitalizing on the revival of the sector’s industry after the 90’s crisis, Txus Dominguez begins to design and construct skateparks for other companies, being part of the design projects, construction and advising of more than 50 skateparks, until in 2006 founds his own company ZUT SKATEPARKS together with Alex Mosterín, skater, photographer, muralist and graphic designer, making the perfect tandem together with Txus Domínguez, having constructed another 50 skateparks all over Spain, France and Portugal, and actually studying projects in China and South-America.

The idea of creating ZUT SKATEPARKS developed from the imperative need in Txus Domínguez of being independent so to create first quality skateparks, designed by and for skaters, without the issues in the control and execution of the projects he use to find when working for other companies.

ZUT SKATEPARKS team always works with the mentality that skateparks are for skateboarders, and they put their main effort in listening and supporting the local skateboarders so they can achieve all their golds in the construction of their skatepark.